She arrived in a white limo and they hired a horse drawn carriage for after the ceremony. However, the groom arranged for a special romantic gift for his bride and her grandfather without their knowledge. It was one of the sweetest romantic gestures I’ve seen.

All was going according to what we planned. The bride was on time arriving in her white limo at Strathmere Inn. Since I love horses, I had visited the carriage pulled by two Percheron horses earlier.  As I was getting ready to head out to the ceremony area, I noticed an antique car park in front of the Lodge. I asked the groom what that was about and that’s when he let me in on the secret.

The wedding ceremony went well. At the start, I said some words acknowledging those who could not be with us physically but whose love was not forgotten on this occasion. I noticed the bride get a little teary over the recent loss of her grandmother. There was a special moment when her grandfather blessed the marriage. It was obvious that she was very fond and felt close to her both her grandparents.

After the kiss, the newly married couple headed out to pose for pictures. I took special attention to help the grandfather out for the special gift that was arranged. The bride shouted in joy when she saw the 1930 Chevrolet parked outside and the grandfather beamed.

There is a family picture of a groom helping his new bride out of a 1930 Chevrolet. It is a picture of the bride’s grandfather and grandmother on their wedding day. The groom had secretly arranged to have that picture re-enacted for his love and her grandfather. What a romantic and thoughtful gesture! 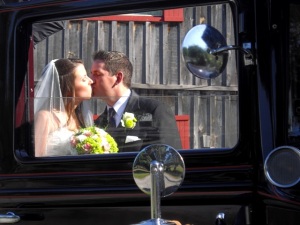 After the pictures were taken with the car, the couple went for the horse drawn carriage ride as planned. Well Done, Mr. Groom. 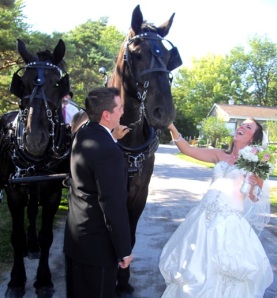