The big snowflakes were gently falling, while I conducted a handfasting on the Ottawa Rideau Canal. The City of Ottawa has the Rideau Canal that runs through it. During the winter, the Canal becomes the world’s largest skating rink. From start to end, you can skate 7.8 km. It was on the frozen canal that I performed a magical valentine handfasting.

I met the bride and groom at the bride’s parent’s house just before the start time of the ceremony. The house oversees the Rideau Canal and the view of people skating by was tremendous. I could see big snowflakes falling gently. I asked for the rings that were to be exchanged. Immediately, I was struck by the unique and beautiful design of the bride’s ring. It had two rows of diamonds and an offset larger diamond. One row of diamonds was from the bride’s grandmother’s ring and the other row from the groom’s grandmother. The offset larger diamond had come from an antique ring. I also received the seven foot knitted chord that the bride had made. This was for the handfasting portion of the ceremony.

There was a special moment at the beginning when I said these words, “We would like to take a moment of silence to allow everyone to connect with their God or spiritual guides.  In this moment of connection we all take part in setting and holding a sacred space for their ceremony today.” After that, it did seem that this public place had become sacred. People would skate by, and become silent in respect to the ceremony underway. There were about six kids who were skating by who stopped and watched. Their father insisted that they leave. But they said, “No Daddy, there’s a wedding going on!” And they stayed the whole time.  In fact, the audience doubled as by-passers stopped to join in the moment.

I needed to brush the snow off my text so I could continue. The handfasting was very moving. A handfasting ceremony is the recognition that things will not always go right in a relationship. However, the intent is never to harm. The intent is to combine strengths and failings to forge a better relationship. I made seven statements. At each statement, I wound the knitted chord one more time around their clasp right hands stating, “And so the binding is made.” to seal the intention.  They exchanged rings. I blessed the couple and declared them to be married.

When they kissed, the crowd exploded in joyous cheer! Their fates were sealed. They received many congratulations even from people they did not know. The ceremony was complete and the sacred place slowly dispersed having served its purpose.  People skated by. Yet as I walked off, the magic still lingered. 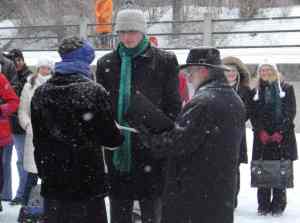